Q: Can we talk about your drinking habits and how they’ve changed over time?

Ley: I was the poster boy for binge drinking in college – I alluded to it in the beginning of our book. I’ve had to go to the hospital multiple times for drinking-related injuries. I’ve lost jobs and relationships because of the regrettable things I’ve done while intoxicated. There was a point in my late 20s and early 30s when I met my wife, became engaged and then got married, and my life became bigger than just me. I was still heavily drinking, and it hurt so much to apologize to the person I loved as much as I did. I just became exhausted from apologizing for drunk me. So then, during that time – though it’s super ironic and people think it’s really crazy and unbelievable that I came out on the right side – I voluntarily chose to immerse myself in an industry that very well could've killed me.

When I married my wife, I moved from the east side of Michigan to the west side, and Grand Rapids is Beer City USA. I became immersed in the craft beer scene that was just booming and I fell in love with it – the culture, the camaraderie, beers that were experiences – and that propelled my passion for the industry. I had to respect what I was consuming, otherwise I would ruin everything.

So for me today, I love and I cherish the amazing opportunities I get through Better Drinking Culture; like the opportunity to spend a week at the Great American Beer Festival (GABF). When I drink, I have to be intentional and mindful of everything: where am I, what obligations do I have to myself, my friends, my family, my job today, what obligations do I have tomorrow, and how much in this moment do I want to and need to consume in order to enjoy the experience. I want to go back to Michigan next week and remember every awesome moment of GABF. I want to remember that three-hour road trip that my Dad and I took yesterday to go to Casey Brewing and Blending and if I went at it with the same obnoxious gusto that I did 10 years ago, it would lose all value. So for me it’s the love I have for myself the people around me and the amazing opportunities that my career affords me.

Q: Do you think consumers see drinking craft beer as “better” than commercial beer, and don’t watch their consumption as much because it feels good to be part of a community?

Ley: I think there’s definitely a feel-good factor in visiting a craft brewery that sometimes makes you forget about how much you’re drinking. Like the consumer who lovingly cherishes their local craft brewery, they can bring their dog and it’s OK to drink a little more because I’m not drinking a mass-market lager. But it goes both ways: the consumer has to trust and rely on the industry that they’re in good hands. When I go to a craft brewery, I’m going with the initial hope that I’m going to get a better experience than if I go to my neighborhood dive bar that doesn’t care whether I leave standing up or crawling out. 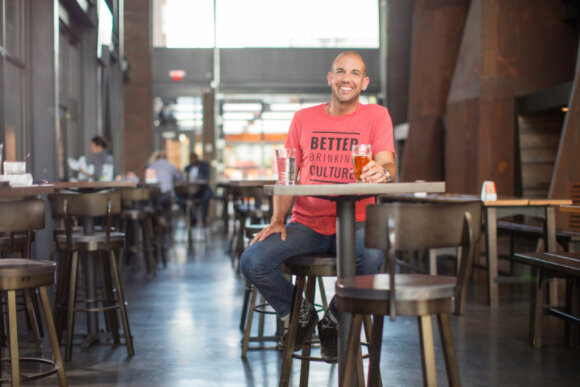 Q: So how does a consumer walk into a brewery and know they are in good hands?

Ley: The lowest-hanging fruit judge of an establishment is their social media – it’s the easiest thing a brewery can control and the quickest thing a consumer is going to notice. If a consumer is getting all of these great messages from a brewery, that they care about their community and sustainability and the environment but doesn’t back that up, or if it makes light of excessive consumption, then we have a problem – there’s a disconnect. There is still this awkward taboo for talking about alcohol use disorder or binge drinking, right?

In our book, The Drinker’s Manifesto, I paint this scenario of college students—they never say to one another – Hey, do you guys want to binge drink this weekend? Instead, it’s: Hey, who wants to go party this weekend? Hey, let’s go out for some beers or drinks tonight! That’s much more romantic and tolerated. So if the industry isn’t doing their job of promoting safe consumption, then the consumer really has no framework other than their own to make the best decisions.

Q: Can you tell us about some breweries that are doing a good job of this kind of consumer education?

Ley: Better Drinking Culture’s Certification Program recognizes breweries, distilleries, bars, and restaurants for demonstrating established benchmarks of best practices. Otherwise, no. There really aren’t very many that do so with the same enthusiasm as everything else they promote. Talking about safe consumption and the harms associated with alcohol is just not put out there because it’s awkward, and because the alcohol industry wants to sell as much booze as possible.

At Better Drinking Culture, we want to create an educated consumer so they can consume longer and not ruin their relationship with alcohol from some bad experiences. Rather than chasing sales today and trying to hook as many people as possible, we want a longer term investment to create an educated consumer who respects their product a little bit more.

Q: So, there are NO craft breweries talking about how to moderate consumption or alcohol use disorder at all??

Ley: There are a couple that come to mind, like Brewery Vivant in Grand Rapids, Michigan. They were the first LEED certified craft brewery in the U.S. and are very community-focused and do a lot of things the right way. They instituted a maximum drink policy of 3 to 4 drinks per visit – depending on the ABV and volume. They’re sending the message to the consumer that we honor a drink max policy very simply, because we care about you, which Better Drinking Culture endorses.

We’ll endorse any establishment that goes out on the front line and makes a statement acknowledging with the risk associated with the product – and says we care about you. Breweries should be doing this, because there are many, many consumers who don’t care about themselves or haven’t figured out the sweet spot of their own drinking. People don’t leave home for college with the knowledge of how alcohol is really going to affect our bodies, our communities, and our environment. We help educate the consumer by saying there is more to alcohol than just drinking as much of it as you can.

Another brewery leading the way is in Sawyer, Michigan — Greenbush Brewing Company. Their owner, Scott Sullivan, went on record last year that he was dealing with some very heavy mental health issues which were exasperated by heavy and problem drinking, which almost cost him the brewery. It was through a lot of support from family and friends and hiring the right people that helped right the ship. Now he’s very vocal about his personal journey, and his messaging around alcohol use extends to staff education and the way they communicate to the consumer.

But as far as a brewery just communicating the importance of mental health, mindfulness and moderation – I haven’t found that amazing example. I’m always looking for one. If you’re out there, we should talk. First one’s on me.

Q: So how can craft breweries begin tackling the issue of safer consumption?

We are looking for easily attainable benchmarks — like instances where they may unintentionally be endorsing excessive consumption or making light of it. We scrub everything they do from language, delivery, messaging, even hashtags. We overlook those subtle messages that drinking lots is OK, that drinking is what you have to do to get through life. Our mission is to call bullshit on that – we want to pull back the curtain on the stuff that no one wants to talk about because it has to be acknowledged.

At the core it’s the consumer who makes these choices, but in order for the consumer to engage and participate in this amazing craft beer industry, we have to hold the alcohol industry and our favorite establishments accountable.

Q: Do you believe in a sober month for people who want a break?

Ley: We support anyone on their journey if they want to take a swing at going sober for a day, a week a month or a year, but everyone is on their own journey. And Better Drinking Culture is made up of drinkers and non-drinkers, so as far as personal steps that we would recommend, this is pointed at someone who does currently drink perhaps just enough to where they’re considering taking their foot off the gas. The first thing you have to do is an audit of yourself, of your mental and emotional health. There’s nothing super sexy about it but you’ve gotta be willing to look yourself in the mirror when all of the dust from last night has settled and really ask yourself if you’re doing more harm than good to yourself by how much you drink.

I list out some warning signs of alcohol use disorder in the book. While I was writing the book and I got to the section on signs of alcohol use disorder, I broke down and cried because I have identified with so many of those warning signs. It really comes down to them asking yourself these same questions – are you allowing alcohol to substitute healthier behaviors in your life? Are you drinking to cope? Are you drinking to feel more confident? If you can look yourself in the mirror and answer yes to any of those, then first and foremost let's pause and slow down our drinking. Let’s be honest, because if you’re answering yes to any of those questions and you’re drinking, the problems are only going to manifest and it never ends well. So can we shorten the learning curve between binge and mindful drinking.

Q: Your book was first released in June 2019. How have people responded to it? Have any groups or schools picked it up? What impacts has it made?

Ley: It’s still really new and fresh in that sense but I will say that since it came out, I’ve been invited to speak at multiple colleges as well as in front of various state liquor control agencies. I have a budding relationship with the Brewers Association and their craft beer program manager has taken a really neat love to it already, so she and I have talked about how to integrate it into some of her brewer initiatives. Do we hope that The Drinker’s Manifesto gets integrated into college curriculum or orientation? 100%. It invites people into the conversation rather than shaming or excluding them.

Jason Ley is the CEO of Better Drinking Culture. While The Drinker's Manifesto is his first book, as a freelance journalist he's written for Condé Nast affiliate October, MittenBrew, and Experience Grand Rapids. Ley is also the creator of Emmy-nominated Modern Ahabs, a Certified Cicerone®, and a Stave & Thief Society Executive Bourbon Steward. And, with over a decade of professional experience in the service and hospitality industry, Ley regularly consults on operational strategy, branding and marketing, and the holistic guest experience.

Crystal and Tara Luxmore are beer writers and have won four awards for their stories from the North American Guild of Beer Writers. They are based in Toronto but conduct sensory training and tasting workshops with breweries and cideries across North America, and curate beer menus for some of the best beer venues in Canada.