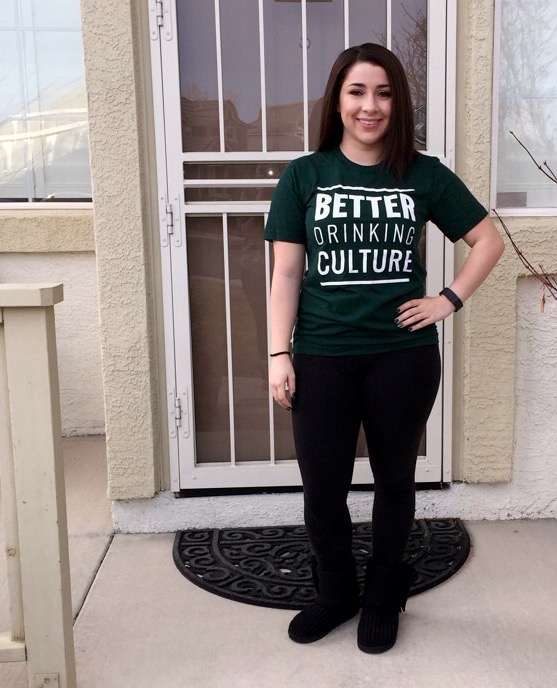 Hanna Lottritz repping the BDC Sweet Tee in Reno, Nevada. Hanna shared her remarkable brush with death experience after a night of binge drinking which has since gone viral.

Hanna Lottritz, a student at the University of Nevada, wrote a blog post about her near death experience after binge drinking at a country music festival.  Shortly after posting, her story went viral across the web, reaching over 620,000 views and getting picked up by Inside Edition and Time Magazine. Although her story is not all that uncommon (nearly 6 people die every day from alcohol poisoning- CDC report), we believe her story stands out because of her perspective on the experience. "It wasn't the alcohol, it was me" says Hanna, "I want people to know that it's possible to have a healthy relationship with alcohol, even after what I experienced."

Hanna makes reference to this from the very beggining of her story;

Hanna tells Better Drinking Culture that today she's a one drink girl. "When I go out with friends, I'll have just one drink. I don't need anymore than that. I can have fun regardless of whether I'm drinking or not drinking at all."

When asked about the binge drinking culture at school and in her community, Hanna told us "It happens a lot more than people think." And we totally agree with her. Alcohol education and prevention just doesn't seem to be as effective as it should.  Hanna said that in High School she received the typical "don't drink and drive" educational messaging, but that can be interpreted as being Ok to get wasted as long as you're safe about it.

"I'm an advocate of the Better Drinking Culture because I believe it's more effective to teach people about the importance of building a healthier relationship with alcohol," says Hanna.

Hanna has big plans for her future.  As a long time and loyal fan of the San Jose Sharks, Hanna plans to finish her degree in Journalism to pursue a career in Sports Broadcasting.  We at the BDC want to wish Hanna the best of luck with her future endeavors and thank her again for sharing her story and being an awesome advocate of the Better Drinking Culture!