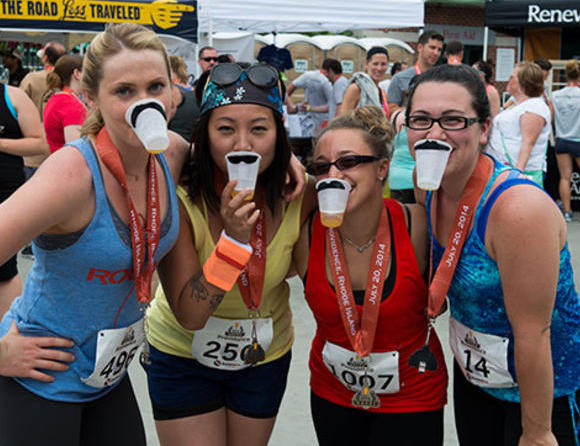 According to a recent study by The Harris Poll, craft beer drinkers tend to have healthier drinking habits than those who consume other types of alcohol. Choosing craft beer over cheap beer often means placing an emphasis on process and ingredients. If you see your suds as the end result of hard work, experimentation and intention, that pint becomes something to be appreciated.

Part of what makes this group a bit healthier is that they tend to limit their alcohol consumption to weekends, and they also take breaks from drinking. Around 47% of craft beer drinkers imbibe mainly on weekends, as compared to 39% of average drinkers (those who consume other types of alcohol somewhat regularly). The researchers found that this demographic is more willing to make sacrifices in other areas in order to make hand-crafted drinks part of a healthy lifestyle. If I know that I am planning to enjoy a couple pints of local micro-brewed stout on Saturday, I may need to pick up an extra yoga class on Wednesday. Incorporating a beer tasting into my week doesn’t have derail my other goals; it can be part of them. In fact, many craft beer enthusiasts may find themselves ditching soda and energy drinks in order to keep a favorite lager on the menu. According to poll results, 39% of craft beer drinkers reported that they are willing to cut out higher-calorie non-alcoholic drinks in order to keep enjoying craft beer, compared to 25% of average drinkers.

The poll found that those who prefer craft beer have added awareness when it comes to nutrition and are likely to prefer locally produced food and drink. Supporting local businesses while on a quest for the perfect small-batch IPA is a great side effect of choosing craft beers. Analysts found that craft beer drinkers also tend to beat their peers by a wide margin when it comes to knowledge of nutritional information in all types of drinks, which likely translates to stronger nutritional knowledge in general. The study discovered that 67% of craft beer drinkers are informed about the nutrition facts for craft beer, compared to 39% of average drinkers, and while this margin narrows when it comes to other types of spirits, the craft beer crowd is still more calorie savvy overall.

This data shows that a key to folding healthy drinking into other healthful habits is to view it holistically; craft beer drinkers tend to view their brews like dessert, as something special to be savored and really enjoyed. Beer is not something that you buy at a gas station on your way to getting blitzed. Instead, it can be part of a lifestyle that is focused on being engaged and present, and may include both grabbing a beer with friends and weekly workouts.