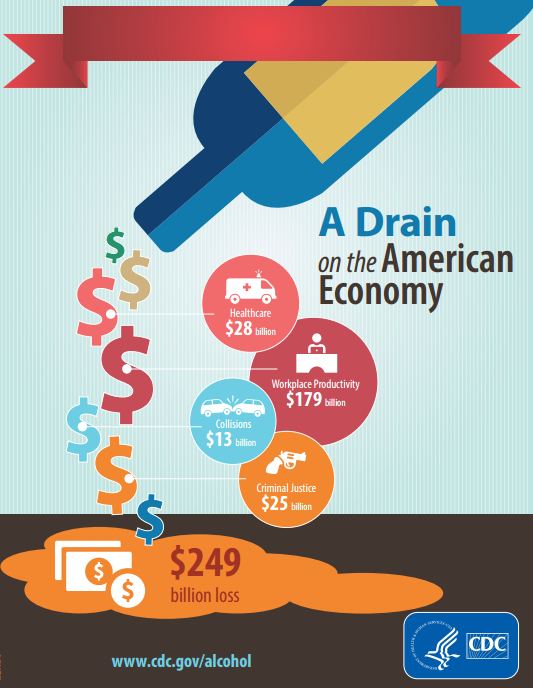 This article was reposted from CNBC

We're all painfully aware of the toll binge drinking takes on the body but what may be less known is the damage it inflicts on the economy.

The financial toll on the economy stems in part from reduced workplace productivity - in other words, hangovers. Crime, accidents and the cost of treating people for health problems caused by excessive drinking also add to the cost.

About 88,000 Americans die each year due to alcohol-attributable harms, including one in 10 deaths among working-age people aged between 20 and 64 years old.

"The increase in the costs of excessive drinking from 2006 to 2010 is concerning, particularly given the severe economic recession that occurred during these years," said Robert Brewer, head of CDC's alcohol program. The CDC did not give numbers up to 2015.

The 2010 cost estimates were based on changes in the occurrence of alcohol-related problems and the cost of paying for them since 2006. Nonetheless, researchers believe that the study underestimates the cost of excessive drinking because information on alcohol is often underreported or unavailable.

"Effective prevention strategies can reduce excessive drinking and related costs in states and communities, but they are under used," Brewer said.

Excess alcohol intake cost U.S. states an average of $3.5 billion each in 2010, ranging from $488 million in North Dakota to $35 billion in California. Washington D.C. had the highest cost per person at $1,526, compared to the national average of $807.